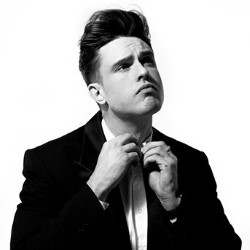 After a sell-out success in 2016, that gobby little toerag Ed Gamble is back with a brand-new lumbering beast of a comedy show. Off of Mock The Week (BBC Two), Drunk History (Comedy Central), Conan (TBS), Almost Royal (E4), Russell Howard's Stand Up Central (Comedy Central), Edinburgh Comedy Fest Live (BBC Three) and Man Down (Channel 4) as well as countless other things (three other things). 'A master of unlocking the humour in everything' **** (List, 2016). "He is on irresistible form" **** (Telegraph, 2016).

The Mock The Week star has written his best show yet. An hour of slickly performed routines on topics ranging from marathon runners to awkward massages. If he keeps up this momentum he'll be playing arenas in a few years.