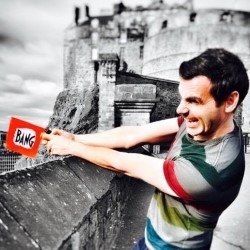 Why do they fire a massive canon every day at lunchtime? How many pubs are named after brutal murderers? How did the Stone of Destiny end up back where it never belonged in the first place? Why did they mark the spot where people were burned alive with a well? Is all of Scotland as middle class as this? Join comedian Daniel Downie for an alternative look at Edinburgh. You'll get answers; they may not be correct but you'll get them! 'Up to the minute material that had the audience in stitches' (MumbleComedy.net).