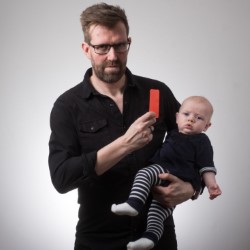 New dad Andy returns with his second Edinburgh show, determined to pass on his life "wisdom" to son Freddie Elvis, the poor kid! Parental Guidance is packed with tongue-in-cheek life advice via comedy songs, jokes and observations as Andy tries to help his boy avoid all the mistakes he's made! There's something for everyone here, and you never know, you may even learn something yourself (although probably not!). 'Stedman displays real talent playing to his audience which gives the show much of its charm' (BroadwayBaby.com). Piccadilly Comedy Club New Comedian of the Year Finalist 2017.