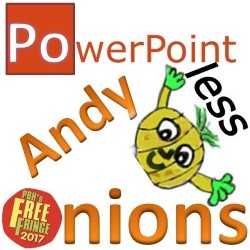 High-octane stand-up comedy show. Andy Onions (Resident MC of the Time Out/i] recommended Freedom Fridge) takes you on a nonsensical multimedia journey. Films, game shows, computer games and obscure childhood sports are woven into Andy Onions daft tales. If you love [i]Street Fighter II, Superman or quizzes then this show's for you. Come and see a grown man in a Hawaiian shirt lose it for an hour. It will be the most lovable breakdown you'll ever see. 'Some say Andy put the compoop into nincompoop. I say he put the nin in there too' (Tim Shishodia).