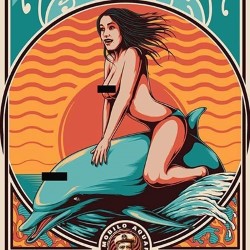 The dolphin - a remarkably intelligent animal with uncommon sensitivity, full of wonder and curiosity. A creature fascinating to humankind, much loved, but ultimately misunderstood. It is too often caged like a circus beast, used crassly as mass entertainment for an uncultured public. Or worse still, its divine likeness profanely tattooed on an ankle, memorialising a week of debauchery at a Cuban all-inclusive. The dolphin is better than that, the dolphin is more beautiful. Magnificent and wise sage of the deep ocean realm, the dolphin deserves better. The dolphin deserves justice: Free the Dolphin!