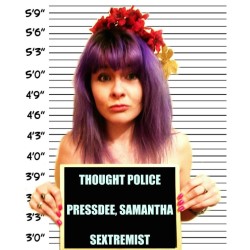 An action barbie with a plastic cock, who's sick of being treated like a toy, invites you to join the sexual revolution! Sextremist is like a Ted Talk, only topless - with jokes. Dress code: tops optional. #FreeTheNipple. Finalist in CAN Comedy's New Act of the Year 2014. 'Samantha has taken part in revolutionary activity across the country, broken out of a hospital and turned down sex with Russell Brand' (BroadwayBaby.com).