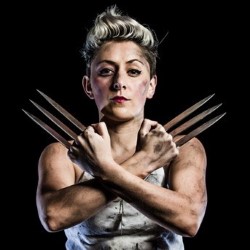 Winner, Outstanding Comedy Melbourne Fringe 2015. Rowena Hutson is a Strong Female Character. Or would be if she didn't have an aversion to latex heels and an obsession with wisecracking heroes like Indiana Jones. And Wolverine. And Bill Murray in Ghostbusters. From this award-winning, critically acclaimed pop-culture fiend, comes an all-singing, all-dancing, brutally honest black comedy about what action heroes can teach us about growing up and growing breasts. Yippee ki-yay mother flippers. **** (TheClothesLine.com.au). **** (GreatScott.media). 'An outstanding comical piece' (XSEntertainMe.wordpress.com).