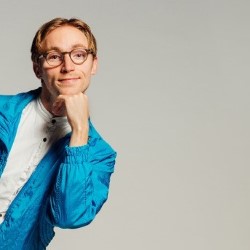 Christopher is a novelist; a passionate, committed and self-confident novelist. The only problem is he doesn't quite know what a novel is. Award-winning comedian Rob Carter brings his new character to the Fringe. A loveable idiot with a smile on his face, Christopher is blissfully unaware of his narrative dead ends, misquoted phrases and inconveniently-placed plot twists. Rob has appeared in Channel 4's Peep Show and Fresh Meat and BBC Three's Siblings. 'A ludicrously diverse performer, Rob Carter is unquestionably worth your time' ***** (ThreeWeeks). 'Rob Carter's alter ego, Christopher. Inspired' (Latest7).