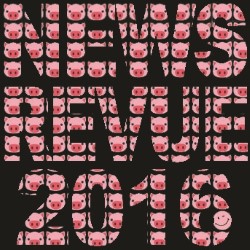 Sketch show / satire performed on the following days in August 2016...

Nobody is safe: from Trump's tweets to the EU tango, politicians and celebrities alike come under fire in a turbo-charged barrage of bladder-threateningly funny songs and sketches brimming with punchlines. One of the best-reviewed shows in the Fringe. NewsRevue is flawlessly delivered by four outstanding performers at lightning speed, expertly accompanied by an onstage musical director. Its exceptional writing, superlative performances and ever-original takes on current affairs have made it a Guinness World Record-breaker, Fringe First winner and a Perrier finalist. 'I love NewsRevue!' (Joan Rivers). 'Professional, precise and pitch perfect' (FringeReview.co.uk).