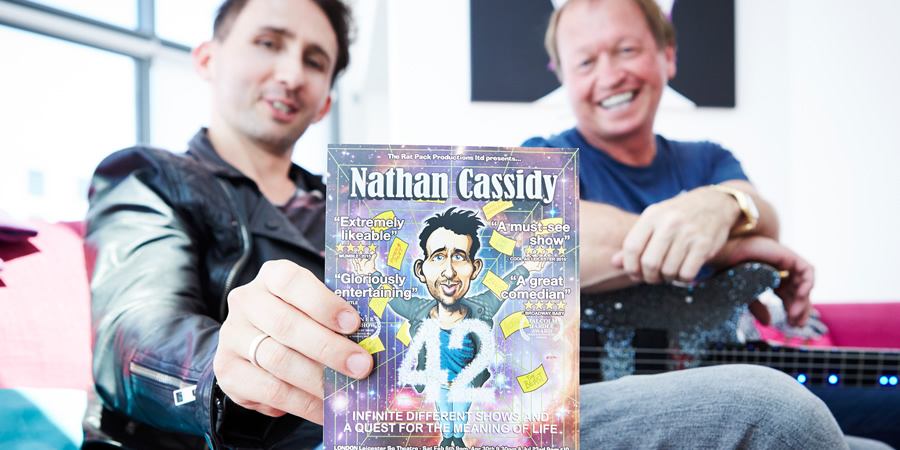 42 ideas, you choose 10. Infinite different shows and a quest for the meaning of life from this critically acclaimed, award-winning stand-up renowned for innovation. No two shows the same. Nathan Cassidy returns to Edinburgh with a show like no other, and by the end of the show no one will be where they were! Expect razor-sharp comedy, 'raucous laughter and great gags' (Skinny) and a whole new stand-up experience. Malcolm Hardee Award nominee. 'A great comedian' **** (BroadwayBaby.com). 'Gloriously entertaining' (Chortle.co.uk). 'Cassidy has a real commitment to making intelligent shows about fun ideas' (FringeGuru.com).

Malcolm Hardee Award nominee and Best Show Winner at the Buxton Fringe 2014 (and nominee 2015 and 2016). The audience chooses a set list of 10 ideas from 42 options creating infinite different shows. Can happiness be found from chaos? Can together we find the meaning of life? Nathan performs a show that the audience will never have seen before and never will again - and by the end of the show no one will be where they were - a big surprise, uplifting and dream-like ending unlike anything seen before on the Fringe! And who knows, maybe an appearance from Mark King and Level 42 - anything is possible!

Nathan Cassidy loves the Edinburgh Festival Fringe and wants to give the audience a true one-off experience every night - no two shows are the same and together with the audience he wants to create something truly special, magical even - that's the aim! Audiences at the Fringe are ready for something different and Nathan wants to take the audience with him, maybe literally(!) to a stand-up experience they won't have seen before. The most memorable experiences on the Fringe as an audience are the shows where you don't know where you're going next - Nathan hopes this is one of those shows!

Nathan has become renowned for innovation at the Edinburgh Festival Fringe, nominated for a Malcolm Hardee Award in 2012 for giving away a pound to each audience member in his show Free Pound. He became the favourite for the Edinburgh Comedy Award in 2013 with his show Edinburgh Comedy Award Winner where he gave away £1 bets on him winning the award, gave away £5 to each audience member in 2014 in his show Date of Death (if they didn't die during the show!) and in 2015 performed a unique trilogy of solo shows. He won best show on the Buxton Fringe 2014 and was nominated for the same award in 2015 and 2016.