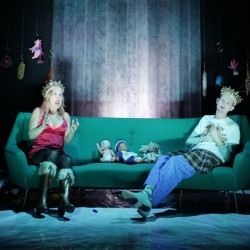 MacBeth and Kurt Cobain and Lady Macbeth and Courtney Love inspire a pitch-black comedy about unbridled ambition, hunger for power and an addiction to intoxication and ecstasy. A triptych of hilarious interviews with the pop stars, a freaky fast-forward puppet version of Macbeth which results in a merciless symbiosis of the grunge couple Cobain-Love and the Thanes of Cawdor. A crazy journey into the world of two seriously troubled people who are trying to escape from their mental prison, as their loneliness howls through the room and the attempts to reverse the inevitable end are heart-breaking.