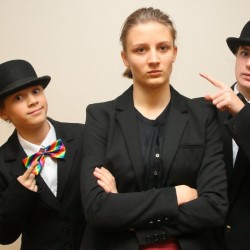 Kids comedy performed on the following days in August 2016...

Hamlet's got the hump. His Uncle Claudius has bumped off his dad and married his mum, who's a bit too fond of "ginger beer". Girlfriend Ophelia won't listen to a word he says and his best mate, Horatio, keeps seeing ghosts. No wonder Rosencrantz and Guildenstern are confused. Mysteries, murders and magical music in this intriguing take on Shakespeare's longest play, specially adapted for a young audience. 'Fun, frolics and lots of noise' (Peeblesshire News). 'Accessible Shakespeare at its best' (Southern Reporter).