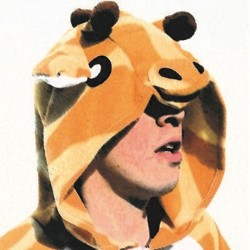 Short man dressed as a giraffe shows graphs, gets laughs, then dissects height discrimination using statistics. It's worth noting that he's recognisable from The IT Crowd, because apparently TV credits positively correlate with Fringe show quality. Things people say about Gareth: 'A unique force to be reckoned with' (Chortle.co.uk). 'The kooky lecturer everyone wishes they had' (FringeGuru.com). 'Best known for being the barista in the final episode of The IT Crowd who is hit by a car with boobs on the front' (Bruce Dessau). **** (Chortle.co.uk). **** (Skinny). **** (FringeGuru.com). **** (ThreeWeeks). ***** (FringeBiscuit.co.uk).