Will Franken versus a heckler

This video, filmed by Lewis Schaffer and published by John Fleming, shows what happened when Will Franken stopped his show to deal with a man who was talking. Franken pointed out in strong terms to the audience member that, unlike a comedy club set, Fringe shows are not designed to withstand audience chatter: 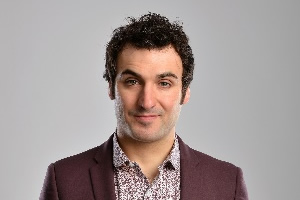 Five "middle-class kids with trust funds who think they can dictate the whole night" tried to ruin one of Patrick Monahan's gigs. It ended with one of them chucking a full pint at him, before the group walked out.

The comedian jokes that you could tell they weren't working class, as if they were they would have first finished the drink before chucking the glass.

Geoff Norcott gets a Brexit walkout

Geoff Norcott is one of the only comedians who is 'out' as a Conservative voter. Now, he has captured on tape the moment one women walked out of his show, which is titled Geoff Norcott: Conswervative. He explains: "As well as talking about how a working class person like me ends up voting Tory, I also mention I voted Leave. It's always the most tense moment in the show and this night I managed to capture one kind of response." 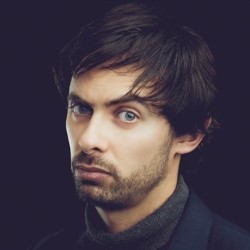 Marcel Lucont - the French character played so convincingly by London-based Alexis Dubus - has been catching out journalists who haven't been paying attention properly for years now. You may recall the infamous one star 2014 review in which the reviewer could not grasp why the audience were laughing at the "French comedian".

This year it was the turn of a journalist from The Glasgow Herald to take the character at face value.

The newspaper printed a statement from the "French comedian" in a factual piece about how Brexit has not affected ticket sales. The writer appears to have failed to spot it was clearly a joke quote. Speaking about the rise in ticket sales, Marcel said: "I believe it is largely due to the fact that I am back in town after a year's absence, reminding audiences of the quality that can truly be achieved in comedy... of course, post-Brexit, the British audiences need humour, but also a reminder of what they have waved goodbye to."

Man tries out joke on flyerers 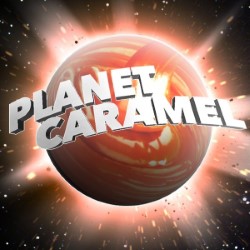 Sketch group Planet Caramel told us about a man in his mid-70s who has been going around trying out a joke on those trying to plug their shows...

"While flyering one day, a man came over to us and said 'Are you giving away caramel wafers?' 'We are, if you come to the show', we told him. 'Well, I'll tell you what, I'm actually looking for a gram of Charlie. Ha! You surprised boys? Nothing wrong with it!'

"After we said we didn't have any, he moved on and approached the next flyerer less than six feet away. 'Have you got a free improv show? I'll tell you what, I'm actually looking for a gram of Charlie...'"

Apparently the man was witnessed trying that line on pretty much every flyerer on Cowgate.

We're mid-article, so a quick charity-linked service announcement: If you've been staying at the festival for a long stretch, you may find, come the weekend when it's time to leave, you have some food in your cupboards that you've not got around to using. A food bank collection is being setup at the Free Sisters pub on Cowgate this Sunday between 11am and 4pm to ensure such items are redistributed to those in need. Facebook details

Still on the topic of good deeds, a karma bonus should be heading the way of Tony Cowards and Javier Jarquin. Shocked at how much litter they found around Arthur's Seat, the duo organised a team of comedians to help tidy things up. Across several trips, which they dubbed #LitterPickoftheFringe, they collected up several bags of rubbish.

Comedian Bec Hill got married at the Gilded Balloon last week. In the show-themed ceremony, the audience - which was packed with comedians - witnessed her marry Gavin Innes. He had proposed to her during her show at the same venue in 2013.

Here's a video of the ceremony:

The Singing Psychic is accidently psychic? 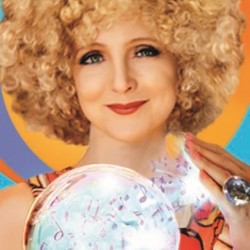 The Singing Psychic - a comedy character played by actress Marysia Trembecka - 'reads' the songs in people's hearts during her shows. She has been getting some readings "scarily accurate" which, as Marysia tells us, "was not the plan."

The character sung to one dance teacher in the audience "Let's dance, put on your red shoes." At the end of the show, his wife came up to Trembecka to reveal that her husband had ordered his normal black dance shoes and they had received an email just before entering the show saying they had sold out of the black design but they did have a red pair available in his size. He is apparently now considering getting them.

Trembecka has a number of other stories linked to her 'accidental accuracy' this month, including one about a man who picked out a card at the end of the show that matched the song she had sung to him earlier - a 1000 in 1 chance. 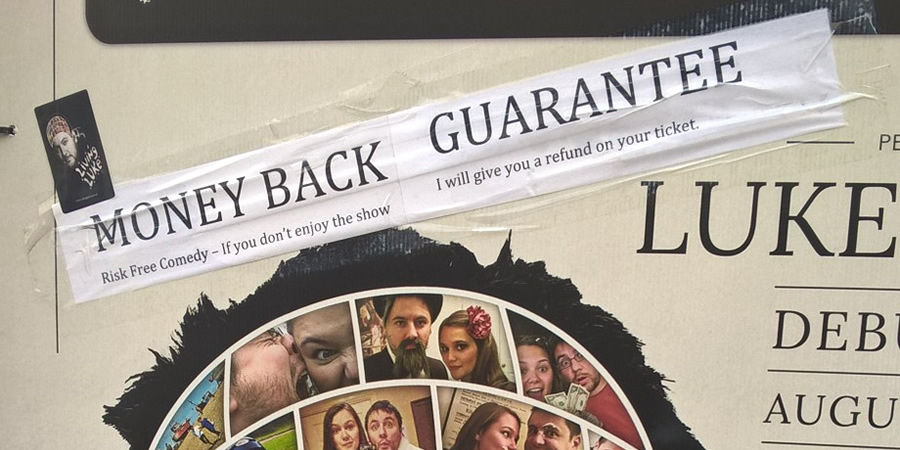 This festival Luke Graves has embarked on an interesting marketing tactic. He explains: "When I discovered that I had only sold six tickets I offered a couple that were sat in my venue free tickets to see the show. They accepted and after the show they went to the box office and asked if they could pay for the tickets, refusing the 2-for-1 offer on the day and paying full price.

"As a performer, this is the nicest thing that has ever happened to me in the years that I have been coming to the festival. It also gave me an idea, for the rest of my [linksubte=/fringe/2016/luke_graves/]Edinburgh run[/link] I will be offering 'Risk Free' Comedy, every ticket sold comes with a money back guarantee. If anyone does not like the show I will personally give them their money back."

We caught up with Luke yesterday for an update. He tells us: "I am yet to have to give any money back!"

Cult alternative event Edinburgh Metal Party has been using comedy posters to get the message out about their show: 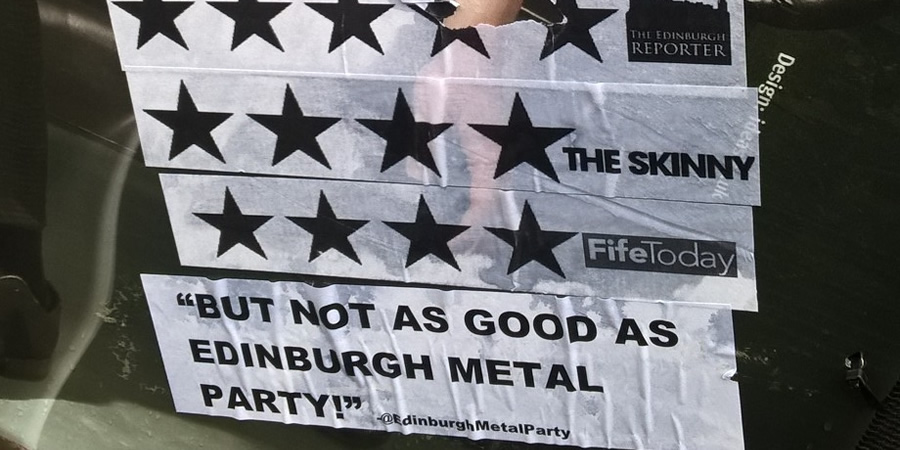 Performing in Edinburgh? You've got a 5 star review! 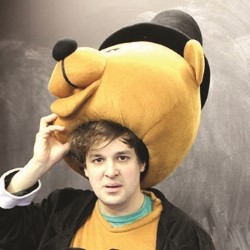 if you're performing at the festival, you've got a five star review!

Well done you! If you head to Phil's website you can download a "Nothingism Award" graphic for use as part of your marketing strategy.

Where is Laurence Owen staying?

Comedian and composer Laurence Owen has been pleasing audiences with his ace Cinemusical High show. But where is he staying in Edinburgh? We think we've spotted a clue... 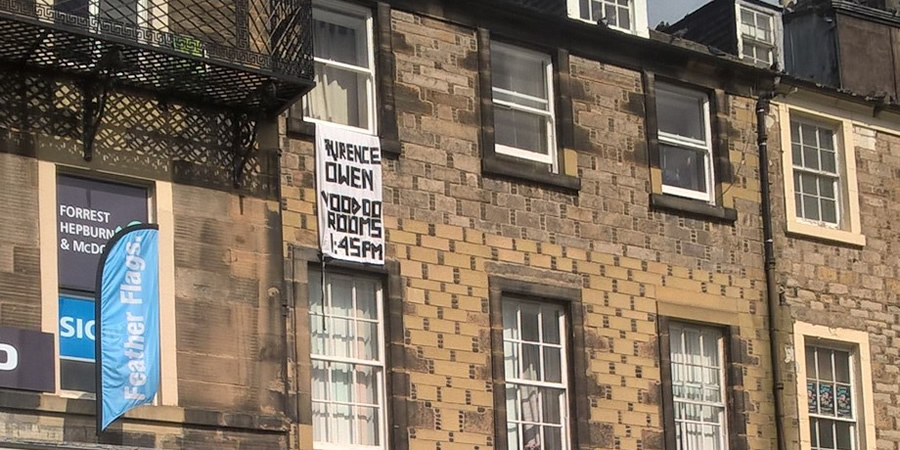 Angus Dunican is staying directly opposite Owen's flat, and - having been cheered on by fellow resident Ian Smith - he has erected his own 'tribute' sheet. BCG understands there may be a little surprise in store for Owen before the festival is over.

Update, Sunday 28th: Angus and a couple of friends went along to Laurence's last gig wearing t-shirts mimicking the sign and sat in the front row. "Laurence loved it, as we were there to support him as well as gently weird him out." 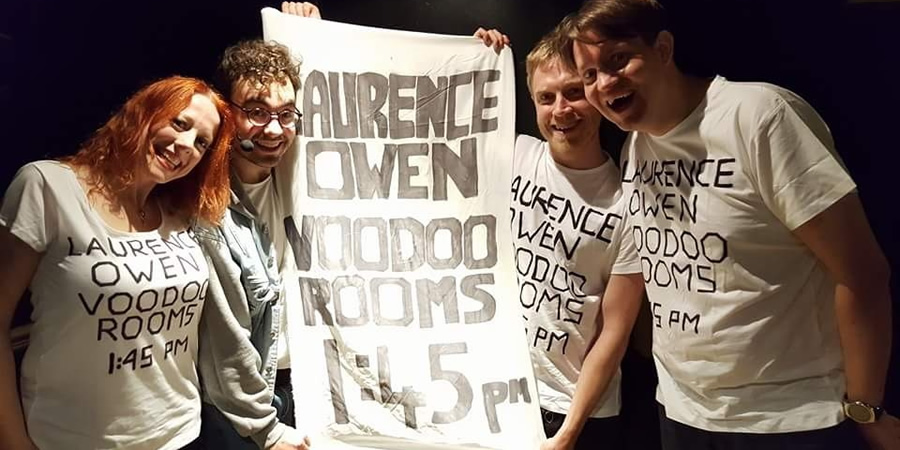 Angus tells BCG: "Then I go into my gig and there Laurence is on the front row with a t-shirt saying 'ANGUS DUNICAN. GILDED BALLOON 4:15pm'. What a lovely man!"

Where is CSI Comedy? 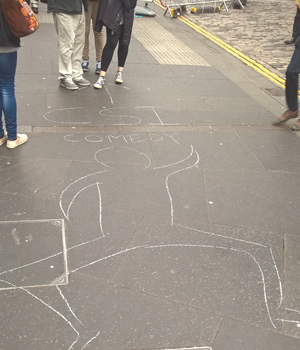 Improv offering CSI: Crime Scene Improvisation have come up with a good way of pointing out to people where the show is...

Given how much it has rained this month, we imagine they've had to re-apply the directions a few times now though! 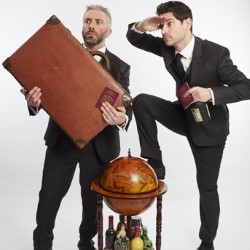 One often suffers mysterious injuries after a drink or two. However, Tom Sandham, one half of the The Thinking Drinkers: Pub Crawl, has endured a triple measure of misfortune this year...

Two weeks before setting off to Scotland to perform their new show he underwent a sudden hernia operation, after which the doctors ordered him not to pick up anything heavier than a "full kettle" for six weeks...

To make matters worse, since then, whilst performing their show, his comedy partner Ben McFarland has accidentally smashed him in the face with a ladder - leaving a huge cut down the middle of his forehead (luckily the streaming blood "added gravitas to a Vietnam War scene" apparently).

Then, the next night, Tom tumbled off the stage while doing some Irish dancing. "If you see me around Edinburgh," he says, "please don't tell me to break a leg".

Zach & Viggo's run in with the US Border Patrol 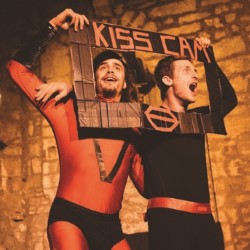 Clowning double-act Zach & Viggo have told us how one of their popular characters - Officer Noodles Hands - was invented: "In January we flew to LA to start our tour. When Viggo walked up to border patrol they asked him why he was here and he said he came to visit his friend Zach Zucker. Because of his Norwegian accent, Viggo sometimes pronounces his Z's like S's so it sounded like 'Sack Sucker'.

"The TSA agent couldn't believe it and started cracking up. He asked Viggo where we met and of course the answer was French clown school. The guy lost it. He pulled out his walkie-talkie and said 'Dave, come on down here. You gotta hear this'. It ended with five other co-workers laughing hysterically and wishing Viggo good luck. Two days later he tried the character and we've kept it ever since."

Eric Lampaert made a kid cry 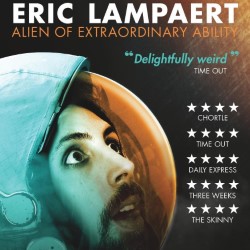 This Is Your Trial is a unique live show format, described as "the UK's only courtroom based improvised comedy."

Eric Lampaert appeared as a guest in one of their shows this festival, acting as the defence. The first case was from a man in the front row who accused his wife of being "a menopausal sex maniac."

Judge Thom Tuck then brought on stage the next audience member: a 7 year-old boy. The case being "he was far too young to hear the last graphic case."

The prosecution's argument was quite simply "He's 7 year-old. I rest my case". However, determined to win the trial, Lampaert decided to prove that the kid was fine to hear such vulgarity. He tested his theory by asking the boy what was the worst word he knew, and told him to say it out loud, promising him he wouldn't get in trouble for saying it.

Witnesses at the show say: "The boy was quiet in his response. He then he started crying..."

Luckily Lampaert has since readdressed the balance by making many people laugh in his solo show, Alien of Extraordinary Ability. 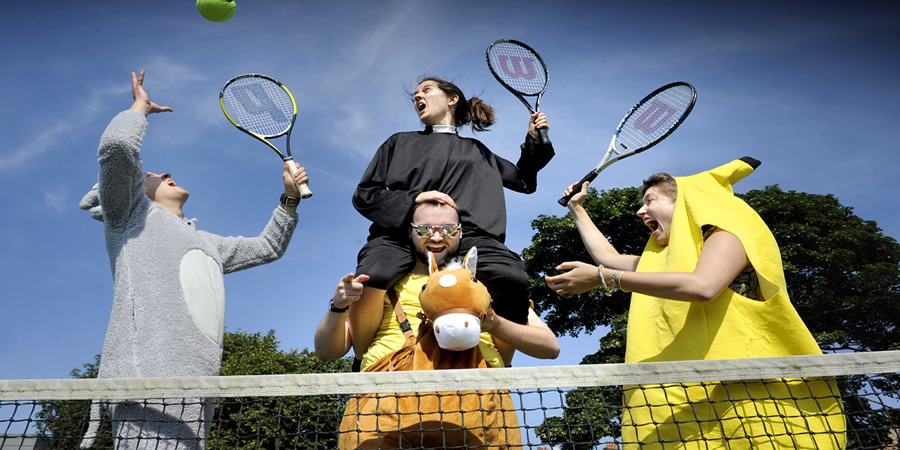 Sketch group Mixed Doubles have publicly challenged the Murray family to a game of tennis... but they're still waiting for a reply.

Megan Smith from the group explains: "Edinburgh has been great so far, the audiences are fantastic and the buzz around the city is superb. But obviously one bit of home-grown Scottish talent is noticeable by his absence, with Andy Murray off winning Olympic gold in Rio. We decided to make up for it by putting on a match of our own in the Meadows. But you know what - I reckon we're pretty good, so if Andy, Judy or Jamie fancy a challenge we are ready to take them on."

The Fringe isn't just about comedy. When we talked to comedians before the start of the festival, a thing we often heard was "this year I plan to take time out to absorb some of the culture around me, like visit Scotland's museums". Well, here's your opportunity people: We spotted this new cultural offering: 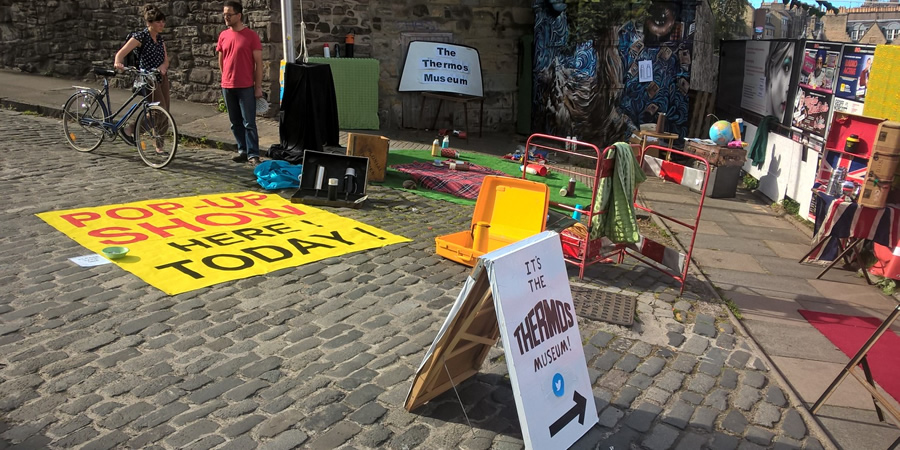 For more of this kind of thing, see our news and trivia page from earlier in the festival: Read