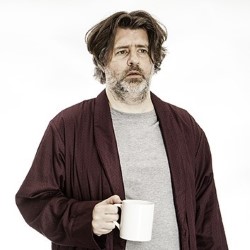 Malachy's been alive for 43 years. But he's never lived. Not like on the telly anyway. He has no family, no girlfriend and certainly no career. So it's no surprise that death isn't like on TV either. But Malachy won't let the pink disease kill the one thing he does have - hope. Every Day I Wake Up Hopeful is a darkly funny examination of a desperate attempt to take control of life before death does. 'An absolutely engaging performer' (Scotsman).