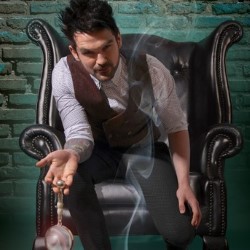 Colin Cloud returns with an exposé... of you. He has the wit of a comedian, the intensity of a hypnotist and the allure of Sherlock Holmes himself. A complete sell-out in 2014 and 2015. The show will extend beyond 60 minutes as Colin invites you, the audience, to solve a mystery with him on the streets of Edinburgh. Warning: Do not think about anything you wouldn't want Colin to know or reveal. 'A lesson in the art of deduction' (Skinny). 'Cumberbatch's Sherlock Holmes in the Flesh' (EdFestMag.com). ***** (Edinburgh Evening News).