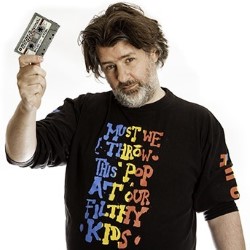 A whole C60 cassette of stand-up comedy about music, mixtapes and recording Top of the Pops off the telly. Join Christian Talbot on journey covering great pop music myths, how best to retrieve a CD from a murder scene, starring in a Howard Jones video and turning down autographs from over-enthusiastic rock stars. Winner of the 2014 Malcolm Hardee Cunning Stunt Award. 'An absolutely engaging performer. The woman next to me nearly dislocated something, so much was she laughing. Can't say fairer than that' (Scotsman).