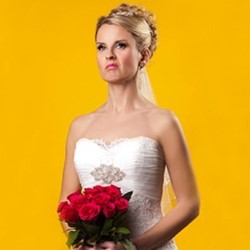 The critically acclaimed character comic and star of ITV2's Bad Bridesmaid and BBC One's Outnumbered returns with her smash hit, sell-out 2015 show. Georgina (of viral YouTube series Georgina's Wedding Blogs) is getting married in Edinburgh and it's got to be perfect. She's having 22 rehearsals during the festival, and you're invited! 'Beautifully crafted comedy' (Independent). 'This show is simply perfect' **** (EdinburghGuide.com). 'The best wedding I've ever been to' **** (BroadwayBaby.com). 'Skilfully performed... Morris is fearless' **** (Herald). 'Terrific writing... exceptional performance' **** (Skinny). ***** (Funny Women) **** (Sunday Herald) **** (The Stage).