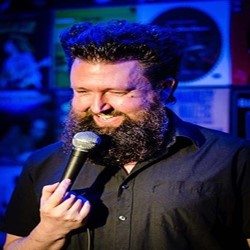 BBC New Radio Comedy Award finalist 2015 and human curiosity Andy Storey has always been positively cynical. He returns to the Edinburgh Fringe with his solo work in progress show @funnystorey. It's all rubbish. Everything you've been told is rubbish. Well known for his deliciously dry sense of humour, Andy roots around in all the rubbish and nonsense he was taught as a child and the ludicrous nature of human relationships.