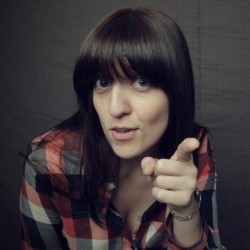 She put her hopes and dreams on hold supporting him and helping him achieve his. It's taken heartbreak to see, but she can do anything she sets her mind to. Starting with things he said he wanted (why the hell not?). He wanted an Edinburgh Fringe show? She's got one! Only it's not revenge if you're doing it for yourself. It's not about him. 'Discreet and innocent - 100% one and damn good at faking the other' (a lover). 'Quiet, understated dignity' **** (List).