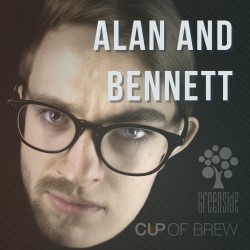 Alan Bennett has a problem: he can't stop talking to himself. Over 45 minutes, Alan and Alan discuss Moscow, monks and mothers, all while trying to ignore that ticking in the corner... 'The cast of two draw us into their mysterious little world with equally strong performances... they hold the audience's attention without fail throughout this enigmatic play' (LauraPeatman.wordpress.com).