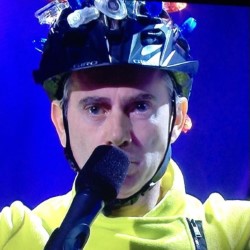 Winner of the Canadian Comedy Award for best stand-up, the deeply deadpan and utterly unique King of Obscure Winston Spear makes his Fringe debut with a comedy and dance routine that will knock, knock your socks off. Best known for the unique dance routines he incorporates into his act, 'he's the wittiest guy you'll ever meet that dances on stage as if nobody's watching! Hilarious!' (Blogto.com). A regular cast member/writer on the Comedy Network's hit show Comedy Inc, Winston's performed at some of the biggest comedy festivals in North America. Don't miss his Scottish debut!

WinstonsWow is a journey inside the mind of comedian, and dancer Winston Spear. This one man show will incorporate music, lights and the off the wall musings of the well-travelled and multi Canadian Comedy Award nominated talent from the Great White North.

Montreal born Winston Spear makes his Edinburgh Fringe Festival debut this year at The Boards from the 5-29 August.

Winston has been crisscrossing the wilds of Canada with his unique blend of humour and dance for the past 30 years. Now based in Toronto he lends his talents to video, stage and television work wherever his wide ranging gifts are required.

A semi-finalist on the popular show Last Comic Standing, an American Idol of the stand-up world if you will, he has performed with the likes of John Cleese, Eric Idle, Jason Alexander, at the Just For Laughs Festival in Montreal. He has also graced himself in music videos by the likes of The Barenaked Ladies and Northern Pikes.

WinstonsWow will definitely have you leaving the theatre exclaiming, "So that was Winston. Wow!"