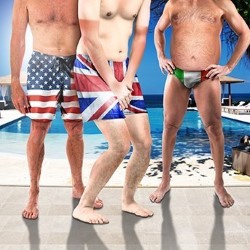 Theatre / satire performed on the following days in August 2015...

We're all going on a summer holiday... 2001. Tony and Cherie Blair are holidaying at Cliff Richard's sumptuous pad in Barbados. Joining them is Tony's close friend and adviser Alastair Campbell, along with Cherie's therapist Carole Caplin and her Aussie beau Shane. Silvio Berlusconi and Michael Winner drop in for the party, George Bush is pumped to find a guy called Al Kida and the Pope's on the phone. Don't miss the hilarious first play by Patrick Ryecart, the director of hit comedy Jus' Like That - before we get sued!