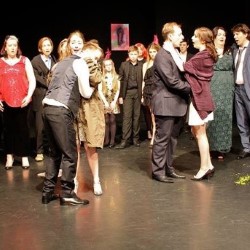 VoiceArc have compacted their production of Le Nozze di Figaro to just 70 minutes of fast furious Figaro fun for the Fringe: Figaro Fugit. Almaviva (Il Conte) is having a bad day. Suddenly the head of this Scottish-Italian family is struggling to keep control of his drugs and prostitution empire. His fixer and hitman Figaro is marrying his most popular club escort Susanna, the object of Almaviva's lust. He attempts to foil the marriage but instead facilitates two marriages and gives his neglected aristocratic wife hope. He is left with a troubled heart, and, crucially, no Susanna.