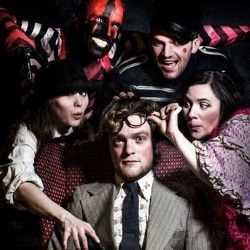 Edward Blank is extraordinary. A mild mannered audiotypist, he rarely leaves his one-bed flat. But Edward is never alone. His tiny magnolia world is far from empty. Unseen by anybody else, but utterly real to Edward, are an imaginary entourage of maniacal friends all vying for attention and adventures. Edward is happy in his ordinary-extraordinary life, until a voice on an audio-tape changes his world forever. Familia de la Noche return after their five-star show The Greatest Liar in All the World, with their darkly comic style of clowning, live music and storytelling.