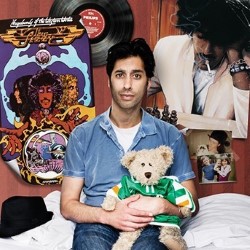 Rob Mountford, a man saddled with a mess of cultural identity is challenged by the statue of his hero - Thin Lizzy's Phil Lynott - to tell that rockstar's swashbuckling story. But as Rob does so, his own story takes over: a tale of confused Irish heritage and untimely death, a story as tragic and funny as life itself. Lynott is furious: surely this is his show. What makes a hero? How true are myths? Chris Larner (Fringe First winner) directs and co-writes this hilarious, philosophical, rock'n'roll one-man show.