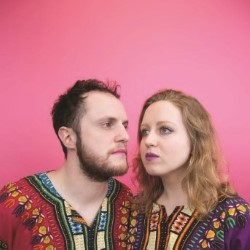 Annie McGrath and Jack Barry are back with another sketch comedy show for people who hate sketch comedy. Charmingly laid-back, self-deprecating riff-waff at its most free. 'Original and funny... Ones to watch' (ShortCom.co.uk). 'Brilliantly outlandish, and left the audience with a clear indication of the pair's remarkable talent' **** (IntermissionBristol.co.uk). 'Jack Barry and Annie McGrath have undeniable comic chemistry, bouncing off each other with a genuine ease and charm that many double acts will struggle to emulate... Unfeasibly good fun' (Fest). '...off the cuff, laid-back and inclusive' **** (List). 'A unique and exciting prospect' **** (Whats-On-London.co.uk).

Following their triumphant debut last year, completely identical Twins, Annie McGrath and Jack Barry return to the Edinburgh Fringe with another sketch comedy show for people who hate sketch comedy. Offering up more charmingly laidback, self-depricating riff-waff and implied reluctance, Pret a Comedy is comedy at its most free. Never shy of dodging a predictable punch-line, cherubic churl, Annie McGrath, is a fearless navigator of the off-beat. Beside her, fuelled by flights of fancy and spontaneous buffoonery, natural humourist, Jack Barry takes gormlessness into new territory. Together, they form one of the most unique, curious, and exciting double-acts around.

One year older, one year closer to death, Twins now grapple with their bucket-list. They have the length of the show to tick off everything they want to achieve in their lifetimes, from seeing the Northern Lights, to adopting a child. Twins: Pret a Comedy is an attempted sketch show and an attempt to make the most of (potentially) their final hour on this planet.

Annie and Jack met at university where they were both part of the 2010 Leeds Tealights cast that won the National Student's Best Student Sketch Group award. After graduating, they formed Twins and have since performed at a number of festivals, including Latitude and Machynlleth Comedy Festival. Twins' filmed sketches can be found online: King & Queen (Turtle Canyon Comedy), Russian Roulette (Channel X/Mr Box), and Hitman (Chris Parton). The duo are currently in development with Hat Trick Productions.

Aside from Twins, Annie and Jack are both stand-up comedians. Annie is performing a work-in-progress show with Nico Tatarowicz on the free fringe: Annie McGrath and Nico Tatarowicz #Pray4Annie&Nico, whilst Jack performs his debut hour at the Pleasance: Jack Barry: This Title Came To Me In A Dream.