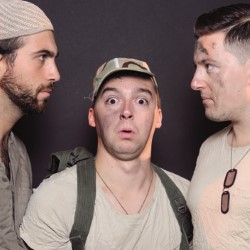 Divided by their differences, two men are united by one similarity: they both have the nasty habit of standing on landmines. A dark comic parable about prejudice. Two men, brought together by a violent clash of cultures, are forced to reconcile their differences and look to the other for help. A poignant and gripping performance that asks, how far have we really come? How removed are we from racial ignorance? What happens when we elect to step off? 'Exceptionally executed' ***** (Music). 'Gripping' ***** (Adelaide Now).