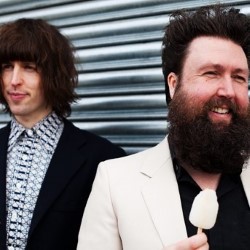 Tom Ward (BBC Radio New Comedy Award finalist 2014) and human curiosity Andy Storey (Leicester Square New Comedian finalist 2012) gloriously unite for an hour, where the carefully thought-out mixes with the improvised... as they meander through their brightly coloured day dreams, always with a keen desire to entertain, include and raise audience states of mind, body and spirit! Tom Ward: 'Equal parts hilarious and bizarre... One of the most impressive, distinctive newish acts around' (Bruce Dessau, Evening Standard, BeyondTheJoke.co.uk). Andy Storey: 'A blend of self-deprecation and razor sharp quips' (Up The Creek Management).