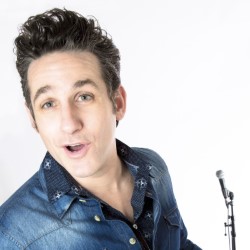 Brand new show from Edinburgh's favourite Canadian resident. Candid and alluring, join Tom as he ruminates on life's oddities and revels in his own shortcomings. Expect the customary Stade flair; uncompromising humour, insatiable mischief and heaps of inspired improvisation. Direct from BBC One's Live at the Apollo, catch this epic talent as he continues storming the global comedy scene. People of Edinburgh (and surrounding areas)... you're welcome! 'Unmissable' ***** (Edinburgh Evening News). 'Every inch a star ... super confidence and charisma. If comedy is the new rock'n'roll, then Tom Stade is Keith Richards' ***** (Daily Record).

The free-thinking philosopher is back! Tom Stade, the Canadian born, Edinburgh resident brings his brand new hour You're Welcome!. You're Welcome! is the sequel to Decisions, Decisions that toured the UK taking in over 70 dates since the Fringe!

Tom asked himself "Where do I go from here?" He's embraced his crazy mid-life fabulously and reached the conclusion that nothing happens after you've made a decision. Exposing life for what it really is, Tom's only agenda is simply to make you laugh. He has one philosophical nugget for us all "Live life to the full...and eat!" And for this you are very welcome.

Essentially You're Welcome! is an hour of pondering on what comes next, just like real life, only funnier! Candid and always alluring, join Tom as he ruminates on life's oddities and revels in his own perpetual shortcomings. Expect the customary Stade flair; uncompromising humour, insatiable mischief and heaps of inspired improvisation. Catch this superstar as he continues to storm the global comedy scene.

Last year Tom reached his forties, for many a landmark moment where decisions have to be made. Some enter a midlife crisis, but not our Tom. In a style true to form Tom pondered the fact and decided that decisions simply don't matter, nor does being in your forties. He's as wild and unpredictable as ever, often seen hanging out with his buddies Kasabian and Carl Barrat. He now thinks that it is completely appropriate for him to refer to himself in the third person, just like a much sexier, much cooler and way more rock n roll Craig David.

Tom Stade is one of a kind, with a genuine flare for observation and improvisation, delivering quality, satire and passion into every set. A natural on camera, Tom Stade's effortless charm has translated perfectly onto the small screen with storming sets on; Live at the Apollo, Michael McIntyre's Comedy Roadshow, Lee Mack's All Star Cast, Dave's One Night Stand and Channel 4's Boyle Variety Performance. He is co-writer of Frankie Boyle's Tramadol Nights, and has his own online sitcom with Daniel Sloss' intriguingly entitled M.U.F.F.