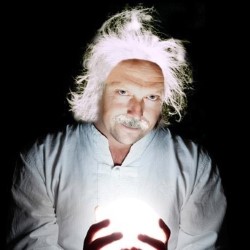 Award-winning comedy and magic. Ian proves the sceptics wrong in this pseudoscience lecture where he tests his psychic gifts under sciencey conditions. (White coats, clipboards, goggles etc). 'The character remains hilarious even as the tricks become remarkable. It is two shows for the price of one: pin-sharp character comedy and metaphysical magic' **** (Guardian). 'The style of the act is genius - if it works, it's impressive, if it doesn't work, well it's all part of the joke' **** (Chortle.co.uk). 'Spookily skilful, wonderfully observed and hysterically funny' ***** (Time Out).