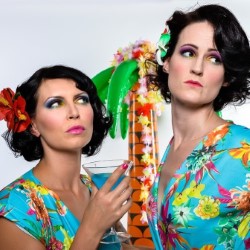 The murderous hostesses, Hope and Gloria return for their third year of high end filth and games. The vibe is Calypso, the songs and games are new, kazoos are inevitable. 'Probably the most fun I've ever had' ***** (BroadwayBaby.com). 'Think Chicago meets AbFab' ***** (Rip It Up). 'One part cabaret, one part comedy and a million parts fun' ****1/2 (Adelaide Advertiser). Twice nominated Best Comedy, Perth Fringe World. Come and play for yourselves! Club Titticana, tickets are free - drinks aren't!

After fleeing the body of a past lover in the cellar and the police in the first show, our saucy sisters ending up serving 'Hard Time'. Not ones to be beaten the audiences turned 'escape committee' sent the two ladies off on a boat to a remote deserted tropical island.

Club Titticana sees Hope and Gloria having to get married by the end of the day or face being burnt as witches as they are over 30! Modern day sucks. Will they find a willing victim? Will they find a way off the island? Or will they find that often its better the devil you know and find each other? One thing's for sure; with original new songs bearing the subjects of finding your first grey pube (Silver Fox), cannibalistic temptations of going out with a stranger (Dinner Date), lacking in the sex department (Dry Spell) and many more, this is a fun and cheeky night not to be missed.

The vibe is Calypso, the songs and games are new, kazoos are inevitable.