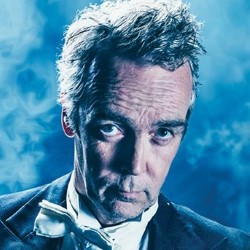 John Hannah (Four Weddings and a Funeral, Sliding Doors, The Mummy) stars in this madcap comedy of illusion. Four tramps huddle together at an abandoned railway station, full of vodka-fuelled dreams of escaping on one of the passing trains. But the trains never stop. Until one day, a dishevelled stranger is thrown into their midst. He claims to be the great Houdini, and promises that together they will perform the most astonishing vanishing act the world has ever seen. A UK premiere by Hristo Boytchev (British Council International Playwriting Award) in a new translation by Steve King.