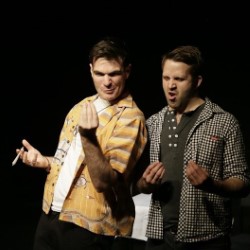 5 Kilo Sugar follows the story of Gur Koren, whose late grandfather appears to him through random people he meets. Gur's grandfather sends him on a mission that begins with sugar smuggling in WWII, and ends in the bed of a lecturer in Eastern European history. Set in Tel Aviv and written in the style of a mockumentary, the play is a farcical yet touching story of one man's journey to fulfil his grandfather's wishes. Tik-sho-ret Theatre Company brings 5 Kilo Sugar to Edinburgh after touring Brighton Fringe 2014 and London.