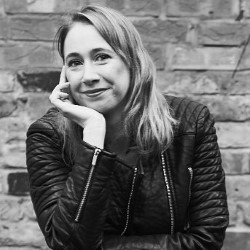 What makes a person? Ideas, labels, sexuality or even slogan t-shirts? Products are anthropomorphised and cult of personality reigns supreme. Are we being sold our identity? May contain Spanish rap. As seen on Mock the Week, Drunk History, Apprentice: You're Fired and People Just Do Nothing. As heard on Radio 4 Extra, 7 Day Saturday, Woman's Hour and BBC Radio Scotland. 'Defiant, yet heartfelt hour' **** (Chortle.co.uk). 'Interesting mix of upbeat foolin' and deeply felt confessional' **** (Mirror). 'Hilarious observations, beautifully written' **** (Metro). ***** (FunnyWomen.com). ***** (One4Review.co.uk).

Soon to be seen as a regular in the new series of the critically acclaimed TV series People Just Do Nothing (BBC Three) and on the forthcoming series Russell Howard's Stand Up Central - Tiff Stevenson heads to the Edinburgh Festival once more for her 6th solo show, Mad Man.

Her thought provoking and engaging style have seen her consistently play to packed audiences and she has often been described as a female Bill Hicks; Tiff's last solo show Optimist received rave reviews at last year's Fringe following on from her previous successes with Uncomfortably Numb, Cavewoman, Dictators and Along Came a Spider.

This year Tiff will explore what makes a personality in Mad Man. In our current world where it is no longer reasonable to be reasonable do we literally have to scream to be heard? What makes a person anyhow? Is it labels, brands, beverage choice, sexuality, music choices or even an Instagram account? When cult of personality reigns supreme and the only religion is a technological one, Tiff asks are we being sold our identities?

Tiff Stevenson is a stand-up comedian, actor and writer. She runs and hosts Old Rope a weekly new material night which plays to capacity crowds every Monday night in London with household names often dropping by each week.

Other accolades include Mervyn Stutter's Spirit of the Fringe award and in 2010 Tiff starred in Celebrity Autobiography at the Fringe and in the West End alongside David Tennant, Michael Urie, Sally Phillips & Doon Mackichan.