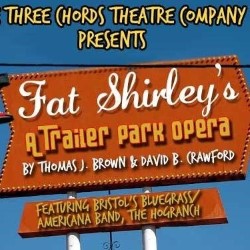 A cacophony of foot-stomping bluegrass musical numbers telling the simple story of a very simple community. In the operatic tradition there is grief, love, peril, betrayal and incest, as the trailer park residents come to terms with an untimely death, possible eviction, and marital strife. Previously performed in the US and the UK, Fat Shirley has developed something of a cult following: the Rocky Horror Show of the bluegrass scene, with audience members often turning up in costume. Live music provided by Hogranch Band.