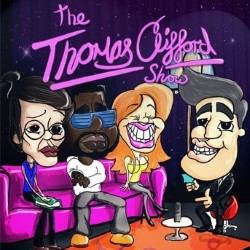 The Thomas Clifford Show is a theatrical spoof of a chat show resembling The Jonathan Ross Show. We follow the host as he struggles upon discovering that his position is under threat. The piece takes a wry look at celebrity culture; is success all it appears to be? Games, improvisation and audience interaction create a comedy that is different every night.

The Thomas Clifford Show is a heart-warming frolic through celebrity culture with the help of Thomas Clifford, as he celebrates the 5th anniversary of his show with a group of special guests who really are larger than life. It integrates games, audience interaction and improvisation as this fast-paced satire invites the audience to join in on this hour-long journey.