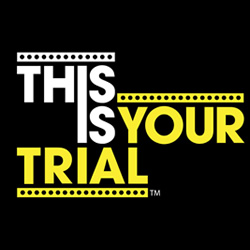 Tim FitzHigham will no longer appear in this year's show. The role of judge will now be filled alternatively by Thom Tuck, Jess Fostekew and Howard Read.

The critically acclaimed late-night improvised show is back, where top comedians play lawyers prosecuting and defending charges set against you! Where everyone is guilty until proven innocent. Book your seat for jury service and check www.thisisyourtrial.com to report crime! Starring Thom Tuck, Jess Fostekew and Howard Read as Judges plus a plethora of amazing talent, previous acts include: Al Murray, Marcus Brigstocke, Phill Jupitus, Sara Pascoe, Fred MacAulay, Pippa Evans, Andrew Maxwell and many more... 'Proper off the rails anarchic humour and wit' ***** (Daily Mirror). 'The only court where the law isn't an ass, but the lawyers are!' (Al Murray).

It's a Fringe-goers dream come true; a brand new improvised show, where top comedians play lawyers prosecuting and defending charges set against you. You decide the accused and their charges. We decide the arguments for each case. You decide their guilt. YOU are the jury!

With the cream of the comedy world already lining up to guest star, this year will no doubt put This Is Your Trial as one of the greatest and most unique comedy shows at the Fringe. Those who have 'taken silk' in the past include the likes of Phill Jupitus, Andrew Maxwell, Al Murray, Sara Pascoe, Marcus Brigstocke, Janey Godley, Fred MaCaulay, Pippa Evans, Trevor Lock and Alex Edelman, and with Fringe favourite Tim FitzHigham presiding over the proceedings as Judge, what could possibly go wrong? This is original improv comedy at its very finest!

Note: Because of unavoidable, unforeseen circumstances, Tim FitzHigham - who has presided in over 100 of these shows before - has withdrawn from participation in the shows in Edinburgh this year. His ongoing commitment to future This Is Your Trial shows is still very much unaltered. The role of judge will now be filled alternatively by Thom Tuck, Jess Fostekew and Howard Read.

David Allison is a law graduate, a writer, director and maker of films and TV, lover of comedy. He devised the concept of an improvised comedy trial to be one of his range of personalised comedy shows after he was brought up on stage for his birthday at the Queen's Head in Camden by the MC, Sara Pascoe.