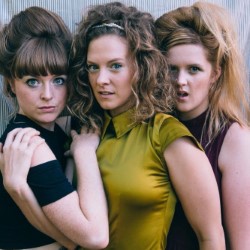 With wild eyes and a wicked flavour of comedy, Australian trio The Travelling Sisters serve up a bevy of tragically charming characters. Ridiculous. Unexpected. 'It's like a fart in a bath. Weird, but kinda arousing' (Barack Obama).

The Travelling Sisters bump and grind their way through a jam-packed and unexpected 45 minute cabaret, celebrating the ridiculousness and beauty of being human in this bizarre world. Meet a giant with a hopeless case of unrequited love, movement artists The Browns Brothers who interpret criminal cases through dance, and middle-aged ukulele trio who are taking the world by storm with their new style 'enviro-pop'.

The Travelling Sisters performed at Woodford Folk Festival 2015. In 2013 and 2014, they performed sold out seasons at Anywhere Festival Brisbane. In 2014-15 they toured Australia and the UK transforming unconventional spaces (living rooms, hair salons, physio practices, gardens, cafes and caravans) into intimate and electric spaces.