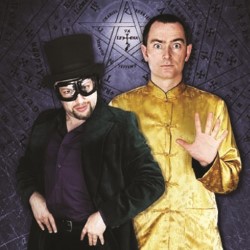 The world's only company to improvise in actual Shakespearean language. A groundbreaking interactive show exploring the limits of what is possible in improvisation. Everything from Shakespeare to Eminem. Award-winners Adam Meggido and Sean McCann have improvised at Shakespeare's Globe, the National Theatre, the Royal Court, the BBC, and Elsinore Castle. They are world record holders in longform improv (55 hours in Toronto). 'Jaw-droppingly extraordinary' **** (BroadwayBaby.com). 'My favourite thing on the entire planet' ***** (ThreeWeeks). 'Intelligent, uproarious laugh-a-minute fare' **** (Daily Telegraph).

Extempore Theatre presents The School of Night: Rhapsodes at the 2015 Edinburgh Festival Fringe from the 5th - 17th August. From the minds that pioneered improvised theatre in the UK and created the award-winning international smash hit Showstopper! The Improvised Musical comes their most challenging and impressive improv show yet.

In Ancient Greece, the 'Rhapsodes' competed for the honour of prizes at the great artistic festivals in Athens. Almost three thousand years later, Adam Meggido and Sean McCann will attempt the hardest improvised challenges on Earth - covering the entire history of literature, culminating in an authentic Shakespearean masterpiece made up on the spot. They are the only company in the world to improvise in actual Shakespearean language. Iambic pentameter. Sonnets. The lot.

A unique and groundbreaking show combining impossible poetic stunts, moving storytelling and the stories of the audience. The show breaks new ground in audience-interactive improvisation - a challenge to involve the audience so they become the heart of the story, not just the starting point.

Award-winners Adam Meggido and Sean McCann have been Edinburgh regulars since Showstopper! first began playing in 2008. This brand-new two-man show pushes improvised theatre in new directions, in a wild journey through the history of literature, and the history of each separate audience.

Adam and Sean co-created The School Of Night with the great theatre maverick Ken Campbell in 2005 and have since improvised at Shakespeare's Globe, The RNT (Olivier), The Royal Court Theatre and for the BBC. They are world record holders in longform improv (55 hours in Toronto). They have improvised all around the world including Canada, Norway, China, India, Austria, Italy, Germany, The Netherlands, Ireland, Belgium, Singapore, and Hamlet's very own Elsinore Castle in Denmark!