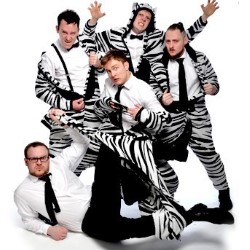 Improv / stand-up performed on the following days in August 2015...

The seven-time sell-out comedy sensation returns to Edinburgh with an anarchic afternoon show for just about everyone. Join The Noise Next Door for an epic hour of outlandish characters, perfect punchlines and awesome songs all mixed together with the guys' trademark brand of off the cuff antics. As seen on ITV2, BBC Three and BBC One's The One Show. As heard on BBC Radio 1 and BBC Radio 4. 'Hilarious ... a superior kind of chaos' (Telegraph). 'Comedy gold' (Guardian). 'Immaculately well executed' (Times). www.thenoisenextdoor.com