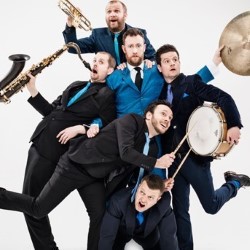 The only band to ever host Never Mind the Buzzcocks and stars of 8 Out of 10 Cats Does Countdown, the mighty Horne Section are back with their very own quiz show featuring the world's finest comedians. After numerous bits and bobs on TV, three of their own series on Radio 4 and five years of sell-out shows around the world, Alex Horne now leads his outlandishly brilliant band into proper question-related battle. 'A frivolously funny mash-up of music and mirth' **** (Evening Standard). 'Wildly entertaining welding of stand-up comedy and big band music' (Guardian).

Stand-up comedian Alex Horne is the creator and host of The Horne Section. The band has enjoyed numerous sold-out runs at the Edinburgh Festival Fringe as well as at: The Soho Theatre, Lyric Theatre - Shaftesbury Avenue, The Criterion Theatre and The Hackney Empire. They have hosted three series of the successful Alex Horne Presents The Horne Section on BBC Radio 4, have hosted an episode of Nevermind the Buzzcocks (BBC Two) and regularly appear in dictionary corner on 8 Out of 10 Cats Does Countdown (Channel 4).

Away from the live stage, Alex has created, produced, and alongside Greg Davies, stars in Taskmaster; a brand new series for UKTV's Dave beginning on July 28th. Based on his successful Edinburgh show of the same name, Taskmaster's contestants are Roisin Conaty, Tim Key, Romesh Ranganathan, Frank Skinner and Josh Widdicombe.