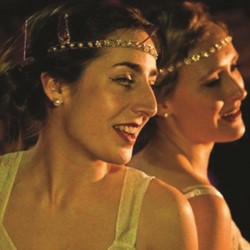 Theseus and the Minotaur meets the 1920s. The Gods of ancient Greece spend their nights in Aphrodite's boudoir, looking for entertainment by playing with the lives of mortals below. But have they bitten off more than they can chew as they meddle with a headstrong Ariadne, a courageous Theseus and a Minotaur that needs defeating? A heady fusion of clown, live jazz, dance collides with Greek Mythology and the Kit Kat club. Award-winning play. The San Diego 2014 Outstanding World Premiere winner. 'Fantastical, inventive, funny ... a must-see' (San Diego Reader).