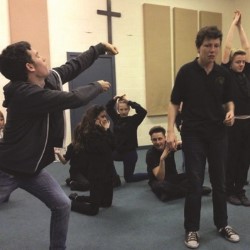 Take one pair of estranged twin brothers (both called Antipholus), one pair of estranged twin servants (both called Dromio) and keep them in ignorance of each other. Throw them into a city with a reputation for sorcery and you have all the ingredients for theatrical chaos. One Antipholus is accused of being mad whilst the other Antipholus gains a wife he never knew he had. A classic Shakespeare fiasco where romance goes hand in hand with comedy. Will delight audiences with romance, humour and the classic case of mistaken identity.