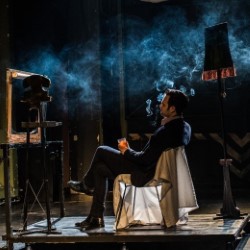 ...trains, planes, car chasing... all in front of your eyes in a suspense thriller and a burlesque comedy about the world behind the movie screen... just 39 steps to get there... After a novel by John Buchan and the film of Alfred Hitchcock's 39 Steps, an original concept of Simon Corble and Nobby Dimon, recreated on stage by Patrick Barlow. An inventive and gripping comedy features actors playing 65 roles in 75 minutes.