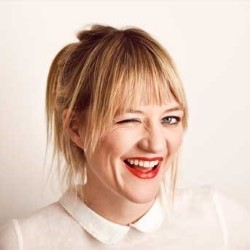 This is the hotly anticipated and hilarious new show from Tania Edwards; stand up comedian (BBC1, Radio 4), and writer (Mock the Week, BBC2, Stand Up For The Week, Channel 4). Tania was a finalist in the Hackney Empire, Amused Moose, Leicester Square, Latitude, and Funny Women competitions. 'Akin to a female Simon Evans... a bit posh and something of a sociopath... fantastically seamy side to the material... also great with audience banter... sublime... brilliant' (Chortle.co.uk). 'Very punchy stand up and her banter with the audience is incredibly quick' (ThreeWeeks). 'Star of the future' (SW Magazine).

Tania wants to know why people think they can stop others having their say - and how she can shut them up. You could call her argumentative but obviously she'd disagree with you: Tania is out to uncover the truth - and she's made up all the facts she needs to find it. Electrifying talks context and canned laughter in a joke-packed exploration of offence.

Tania Edwards is a stand-up comedian (BBC1, Radio 4), and writer (BBC2 - Mock the Week, Apres Ski; Channel 4 - Stand Up For The Week, Twit of the Year; Radio 4 - The Unbelievable Truth). Tania was a finalist in the Hackney Empire, Amused Moose, Leicester Square, Latitude, and Funny Women competitions.