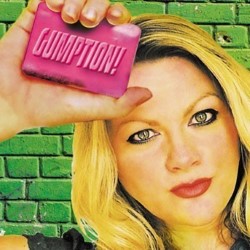 Suzy loves the escapism of the movies, but has realised she was playing the part of best friend in her own life instead of the leading lady. Now she's rewriting her own story. Ditching the old script, killing off surplus characters and finally discovering that little thing called gumption! Funny Women Award winner. 'Suzy is my support act for a reason, she's a charm bomb' (Russell Kane). 'Razor sharp wit, clever, funny and engaging' (Terry Christian). 'Delightful company' (Metro). 'The panache of a young Dawn French' (Chortle.co.uk). 'Vibrant, gorgeous and extremely funny' (BBC).

Suzy loves the escapism of the movies, but has realised she was playing the part of best friend in her own life instead of the leading lady. Now she's rewriting her own story. Ditching the old script, killing off surplus characters and finally discovering that little thing called gumption!

Suzy has been busy supporting Russell Kane in 2014 on his Smallness tour and this year on his Russell Kane and Friends tour at the Glee clubs.

Drawing on her love of films and soap opera Suzy's show is charming and uplifting and makes you giggle the whole way through. Not afraid of the odd prop and costume change Gumption will have you cheering for Suzy as she proves that you can never forget your past but you can 'restore to your factory settings' and take control of your movie if you are the leading lady.

Suzy Bennett is a dynamo of a comic, with a uniquely warm and chatty stage presence who has been delighting audiences with her saucy comedy since her first gig in 2005 when she "accidentally" reached the finals of Jimmy Carr's Comedy Idol, resulting in Jimmy asking her to support him on his Gag Reflex tour in 2007 and also making an appearance on his stand-up DVD.

Originally from Devon, and an ex-Butlins-Redcoat, Suzy continued her early success when she was named the winner of the prestigious Funny Women Awards at the Comedy Store in 2006.

In 2008 Suzy was cast in a 6-part, prime time experimental historical diet show The Diets That Time Forgot as a Victorian dieter for Channel 4. Since then she has been storming gigs in Cyprus, Lanzarote, Majorca and all over the UK, including the Hop Farm Festival and entertaining thousands as part of a tour of Race For Life events as well as hosting the Playtex Moonwalk in Hyde Park for the last two years alongside fellow comics Andi Osho and Miss London, entertaining crowds of 17,000 and introducing and interviewing stars such as Paul O'Grady, Dawn Porter and Marcella Detroit.

2011 & 2012 were been busy for Suzy, she hosted The Funny Women Awards Final both years at the Leicester Square Theatre and co-created and performed in her Funny Fillies show at Brighton Comedy Festival with fellow comedian Sajeela Kershi, which later became a successful free-entry female comedy night at Edinburgh Festival and is here again this year.