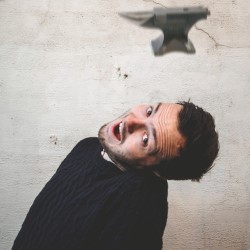 Third show from the guy who makes all the comedy with Turtle Canyon Comedy and supported James Acaster on tour. He is also an atheist on a Christian football team, was a young ornithologist and is such a feminist that he spells misogynist: msogynist. 'Laughs come thick and fast...definitely one to watch' (Fest). 'Confident performance of confident material...priceless' (Chortle.co.uk). 'Loads of ideas and inventive gags littered throughout. Had everyone in the room laughing, and led to a big crowd-pleasing ending' (ShortCom.co.uk). 'Irritating stand up from an irritating man' (BroadwayBaby.com).

Stuart is a stand-up comedian, this is his third full show. He is only doing a week this year. BUT: it's a brand new show that he won't be recycling for a full run next year. Three reasons:

- He wants to get better, he thinks that writing an hour a year, in the structure of a show, will make that happen.

- He wanted to do Green Man Festival on 21st August, after getting booed off in 2010.

- He wanted to have a holiday, rather than sending that money straight into an Edinburgh landlord's pockets.

So he's eager to have a great week with what he thinks is his best show yet. He talks bowling, ornithology, Christian goalkeeping and trying to look comfortable on a train.

He runs Turtle Canyon Comedy, has supported James Acaster on tour in 2013 & 2014, was a finalist in the Hobgoblin Comedy Award and starred in a Radio 4 Extra Comedy Showcase in 2015.

In 2013 he debuted his first stand-up show at the Edinburgh Fringe, was James Acaster's tour support, performed in Colin Hoult's Real Horror Show at The Assembly Rooms. His films have won and been nominated for awards worldwide, have been written about on all major UK comedy sites and featured by international press and websites such as Upworthy, The Poke, The Evening Standard and The Daily Mirror.