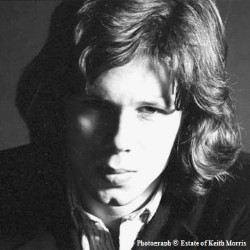 Michael Burdett's award-winning one-man show charts how he found a lost Nick Drake recording and chose to share it in an extraordinary way. Michael travelled the length and breadth of Britain offering strangers an exclusive opportunity to hear the recording. Humorous and poignant, Strange Face celebrates life, coincidences and the legacy of singer-songwriter Nick Drake. And, in an age when music is shared so casually, Strange Face proves the value music can bring to our lives. Awarded DarkChat's Best Free Fringe Show at Edinburgh 2014. Daily at lunchtime.

The extraordinary story of how one man shared a recording no one knew existed returns to The Edinburgh Fringe -and one audience member has the chance to be part of it.

Strange Face is the award-winning show about a lost Nick Drake recording rescued from the bottom of a skip. It charts how Michael Burdett randomly stopped 200 strangers all over Britain and asked if they wanted to hear the track in return for being photographed. The result is a collection of photographs and stories featuring people from all over Britain. Amongst the tattooists, farmers, scientists and city workers are some well-known faces, including Billy Bragg, Tom Stoppard, Ross Noble, Jeremy Clarkson, Paul Whitehouse, Danny Baker, Tracy Chevalier, Fearne Cotton, Martin Freeman and Noel Fielding.

Strange Face is a humorous and occasionally poignant show that celebrates life, coincidences and the legacy of singer-songwriter Nick Drake. And, in an age when music is shared so casually, Strange Face proves the value music can bring to our lives.

Michael Burdett is a composer who has written music for television, radio and the theatre. He has written everything from the theme tunes to Masterchef and Homes Under The Hammer to Arnold Schwarzenegger's posing music for the bodybuilding documentary Total Rebuild. He occasionally releases recordings under the name Little Death Orchestra.

Nick Drake released three albums between 1969 and 1972, none of which sold well on initial release. He took his life overdosing on anti-depressants in 1974. He was 26. Since then, his work has been re-evaluated and his records have now sold in their millions. He is cited as one of the most influential songwriters of the last 50 years and is heralded by acts like Paul Weller, Kate Bush, Ellie Goulding and R.E.M