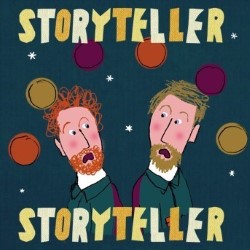 In Storyteller, Storyteller two storytellers arrive at the same place at the same time to share their stories. Confusingly, for everyone concerned, especially the two storytellers, each of them thinks
he is THE Storyteller. Neither will give in and they do everything they can to win the head to head that develops, but who will come out on top? The show is a feast of clowning, physical silliness, magic and discovery - the simplest way to tell a story. Audiences will be captivated for 45 minutes of pure escapism and madcap fun from two masters in the art of reciting tales.

The production is devised and performed by Ashley Bates and Luke Pitman in collaboration with comedian Chris Lynam and directors Julia Black and Adam Forde.

Story Pocket Theatre was born in 2013 from a passion to produce beautiful, wonderful and magical theatre for families. This award winning children's theatre company are presenting 3 shows at this year's Edinburgh Festival Fringe - the ever popular Arabian Nights will be performed at the festival and the company will also be debuting their new show A Pocketful of Grimms - both at Gilded Balloon.

The theatre company's Patron is master storyteller and author of War Horse, Michael Morpurgo. He says 'It was apparent straight away that Story Pocket's focus was on sharing stories in a bright, imaginative way. My passion for stories and writing has taken me all over the world and I am lucky enough to see my stories in print and on stage and screen. It was Story Pocket's passion for story telling that struck me... I am delighted to be the Patron of Story Pocket Theatre Company.'